IAN DATE Jazz Guitarist. Ian has been performing professionally since age 14. When he was 20 he moved to Sydney NSW Australia and became heavily involved in the music scene. Ian based himself in Sydney for the next 20 years and performed and recorded with many of Australia’s jazz greats.

In the mid 1980’s he undertook his first international excursions and appeared with many jazz stars from various countries. He lived in The Netherlands for a year in 1990. He has written music for TV and film, appeared on television, radio and theatre and played on more than 70 albums. He is rightly regarded as one of Australia’s great guitar players.

Ian has performed all over Australia and 37 other countries at various festivals and events. Equally at home on the acoustic and electric guitar, Ian’s playing is firmly rooted in the jazz tradition. He has his own engaging style and he brings his intelligence, craft, musicality, skill and humour to all his projects. Critics have described his playing and performances as lyrical, endlessly inventive, masterful and his live performances as thoroughly entertaining.

Since 2002 he has based himself in Ireland.

Listen to some recordings of Ian 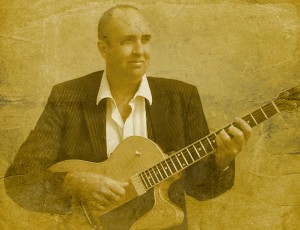